Section Progress:
← Back to Module

In the Native CARS study, additional interviews were conducted utilizing focus groups to review the findings from the vehicle observations and elicitations interviews, to get feedback on mock-ups of the planned media materials, and to review and provide suggestions on drafted intervention plans. 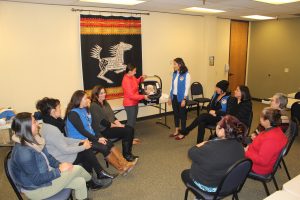 Native CARS conducted a total of three-to-four focus groups among each partner tribe.   Tribes held focus groups across multiple communities or districts within in the tribe, if the geography presented more than one distinct community.   In tribes that had only one main community, focus groups were divided by demographic groups such as parents, and other caregivers (grandparents, aunties, etc.).

Focus groups included both females and males, and participants spanned the age spectrum. The site coordinator from the tribe facilitated the selection and scheduling of the focus groups.  Focus groups were moderated by either the project director or the site coordinator, with the principal investigator taking notes. Additionally, interviews were recorded and transcribed.  The project director presented newly collected vehicle observation and elicitation interview findings, and asked for responses to them by participants. Then, the site coordinator presented proposed intervention plans and solicited input as to the acceptability and practicality of the plans   Lastly, participants reviewed the proposed media elements and provided feedback in terms of the message and delivery method.

Written comments recorded from focus groups were reviewed and immediately incorporated into intervention plans such as expanding or altering the scope of activities, including identified collaborators. Likewise, suggested edits to media were shared with the graphic artists, and revisions were made to media drafts to improve reflections of the community and more closely echo community voices and language recognition.

To get tips on conducting your own focus group, go to the next section.

The next step is to determine what is the best APPROACH to address the issue you identified in your tribal community. At this juncture you need to think back to what you may have learned so far such as what you heard from your coalition, acquired from your community readiness.

The different intervention approaches are:

AWARENESS interventions strive to inform the public about particular public health issues, concerns, and solutions. This approach works well for people who do not know that children under 4’9” should ride in a booster seat, for example. Or, perhaps the community is not aware of a new child passenger safety law. Your job will be to tell them. Examples of awareness interventions may include the following:

See Module 7 for help with media interventions.   HEALTH EDUCATION interventions give people information on safe choices. You might teach them more about correct installation of a child safety seat, or share some of your community’s data on barriers to car seat use. You could share strategies for improving child safety seat use and connect people with community resources, like your distribution program or a child passenger safety seat technician. Examples of health education interventions include:

See Module 8 for help with education interventions.   BEHAVIOR CHANGE interventions strive to create a physical environment that supports, promotes, and encourages the healthy behaviors that address the issues. Examples of behavior change interventions include the following:

ENVIRONMENT AND POLICY INTERVENTIONS strive to establish and enforce practices, policies, or laws that promote healthy behaviors and discourage unhealthy choices. This type of intervention usually takes the longest amount of time to achieve, but has the greatest potential for lasting impact. Examples of environment and policy interventions include:

See Module 10 for help with policy and law interventions.